Full Name
Jonatan Vseviov
Job Title
Ambassador to the United States of America
Company
Estonia
Speaker Bio
Jonatan Vseviov serves as Estonia´s Ambassador to the United States since August 2018. This is his third diplomatic posting in Washington, DC.
Before assuming his current duties, Vseviov worked at the Estonian Ministry of Defense for 10 years, rising to the post of Permanent Secretary. Until his appointment as Permanent Secretary in January 2016, Mr. Vseviov served as the Undersecretary for Defense Planning, the Acting Undersecretary for Defense Policy, and Director of Policy Planning.

During his tenure at the Defense Ministry, Vseviov had a leading role in shaping Estonia´s defense policy both domestically as well as internationally. He is the author of the Concept for Comprehensive Approach to Defense (2009) and the National Defense Strategy of 2010 – documents that led to significant conceptual change in organizing defense in Estonia. In 2012, he was one of the leading authors of the National Defense Development Plan 2013-2022, which reset Estonia´s capability development onto a realistic basis, moving Estonian armed forces from a hollow structure to real – fully manned, equipped and sustained – capabilities. He has also been involved with the preparation and implementation of NATO’s present deterrence and defense posture, including the execution of NATO's enhanced Forward Presence in the Baltic States and Poland.

During his previous tours of duty in Washington, DC, Mr. Vseviov was involved with the expansion of the Visa Waiver Program for Estonian citizens. In light of the 2007 cyber-attacks on Estonia, he was engaged in securing the political support of the US, and in 2014 Mr. Vseviov worked on achieving additional assurance and deterrence measures from the US.

Jonatan Vseviov has completed military service and is a reserve officer. He is a graduate of the Department of Political Science at the University of Tartu and has earned a Master’s degree, with honors, in security studies from Georgetown University’s Edmund A. Walsh School of Foreign Service. He has been awarded the Third Class of the Order of the White Star by the President of Estonia, the First and Third Classes of the Cross of Merit of the Ministry of Defense, the Estonian Defense Forces distinguished service decoration (twice), the First Class Cross of Merit of the Estonian Foreign Intelligence Service and the Medal of Honorary Recognition by the Latvian Ministry of Defense.

From 2011 to 2013 Mr. Vseviov was the academic head of the Estonian National Defense Course. He’s been giving lectures on international relations as well as Estonian security and defense policy in several universities.

Jonatan Vseviov is married and the father of two children.
Speaking At
The Psychology of Resilience 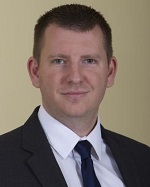